Want to know the History of Sushi?

It's Origins? Where it came from? Why they started eating meat raw? When they started adding Vinegar to the Rice?

Stay tuned to find out all of the answers! 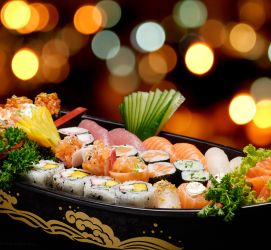 The history of sushi has a little bit of a mysterious and elusive background. And as beautiful as the Sushi is in the Sushi Boat pictured above, it is a far cry from where it began centuries ago.

The Japanese Sushi that we are familiar with is practically an art form within itself. Because, to the Japanese, presentation is almost as important as the actual food itself.

But in the history of sushi and the origin of it; of where it had it's beginnings...well, that's another story all together...

Let's go back in time...to around the 4th century B.C...Southeast Asia

Although the full history of sushi is somewhat clouded and hazy, it seems that it had its beginnings around the 4th century B.C. in Southeast Asia. At that time, cleaned, gutted and salted fish was kept in cooked rice because the natural fermentation process of the rice helped to preserve the fish.

The reason for this is because when the rice begins to ferment, lactic acid bacilli is produced. This acid, combined with the salt, causes a reaction that slows the bacterial growth in fish. This process is also referred to as pickling or "tsuke-ba".

This early form of sushi was called "Nare-zushi". After several months of fermentation, it was taken out of storage, the fermented rice was discarded and only the fish was consumed.

This, as far as I can tell, is the earliest known beginnings of the history of sushi.

"Nare-zushi" spreads into South China around the 2nd Century A.D.

The earliest records of this "fermented fish" is seen in Chinese scriptures around the 2nd century A.D. And it actually was not that popular a dish back then. Over time, Nare-zushi spread throughout China making its way into Japan around the 7th century.

This type of sushi is found to be documented in Japan as early as the 7th century. Later, in the Heian period (around the 10th century), uncooked rice was stuffed inside the fish which had been gutted and cleaned with sake or Japanese rice wine, before being fermented.

During the Muromachi period, or 15th century Naresushi began to divide into 2 groups.

Honnare is the original version of the Narezushi which had its roots in the 10th century, while Namanare, having the same roots, was consumed earlier; before normal full fermentation.The rice which was stuffed inside the fish to aid fermentation, was actually edible having a nice "sour" taste.

The discovery for Namanare it seems, came at the turn of the 15th century when Japan was in the middle of a civil war. Cooks found that by adding more weight to the rice and fish they could reduce fermentation time to about one month while also discovering that the fish didn't need to reach full decomposition to taste good.

Namanare eventually started to become more popular than Honnare, due to its quicker preparation time (the fish was still partly raw) with the extra added side benefit of being able to eat the slightly sour, tangy rice along with the fish instead of throwing it all away.

As you can see, this is where the history of sushi splits off in two different directions...with Namanare leading the way for the future sushi that we know of and love today...

In 1606, a Japanese military dictator, Tokugawa Leyasu moved the capital of Japan from Kyoto to Edo. Almost immediately Edo seemed to undergo a transformation overnight; quickly turning it into one of the world's largest cities.

Around the mid 1700's in Edo, a new fermentation process was also starting to be developed. A layer of cooked rice seasoned with rice vinegar was combined with a layer of fish which was then compressed in a small wooden box for about 2 hours. Afterwards, it was sliced into serving pieces. This process greatly reduced the preparation time for sushi.

Around the 1820's, a man name Hanaya Yohei created what is now considered the modern day version of Nigiri sushi. In 1824, Yohei opened a sushi stall in Ryogoku district of Edo.

He stategically placed his stall near one of the few bridges that cross the Sumida river to take advantage of the traffic and also the availability of the fresh fish from the bay.

Utilizing a newer and quicker fermentation process which involved adding rice vinegar and salt to freshly cooked rice and letting it sit for just a few minutes before using it, Yohei opened for business.

He would hand press some of his rice into an oblong shape, top it with a thin slice of raw fresh fish, and then sell it to customers.

Because the fish was so fresh, there was no need to ferment it and the sushi could be made in a matter of minutes rather than in hours or days.

The constant stream of traffic coming across the Sumida bridge provided him with a steady stream of customers.

Soon, Nigiri became the newest trend in Sushi preparation and the history of sushi was forever altered.

After Yohei introduced Nigiri sushi (also called Edomae-Zushi) in 1824, it continued to grow and thrive in popularity in Edo. Street vendors became very popular during this time, but Nigiri sushi was mainly only available in and around Edo (which became Tokyo around 1868).

Then in 1923 the great Kanto earthquake struck and land prices decreased substantially. This tragedy however, offered an opportunity for sushi vendors to buy spaces and move their carts indoors. Soon restaurants started popping up that catered to the sushi trade which were called "sushi-ya". By the 1950's sushi was almost always served indoors.

The Kanto earthquake also had another effect on the history of sushi. It displaced many Edo (Tokyo) sushi chefs to other parts of Japan popularizing the dish throughout the country.

Refrigeration advances helps to spread Sushi across the Globe

With the help of a thriving post-war economy and advances in refrigeration technology, the ability to ship fresh fish over long distances became possible in the 1970's.

And so, sushi bars opened up all over Japan and with it the network of suppliers and distributors sky-rocketed allowing sushi to expand worldwide.

Los Angeles was one of the first cities to successfully open a sushi restaurant. In 1966, Noritoshi Kanai and his business partner Harry Wolff opened Kawafuku restaurant in Little Tokyo.

Later, in the 1970's a sushi bar called "Osho" opened up in Hollywood, California catering to celebrities. This was the final push that was needed to bring sushi to mainstream America and into the pages of the history of sushi.

Soon there were sushi bars opening in New York and Chicago, helping to spread sushi across the U.S.

Sushi explodes across America in the 80's

In the 1980's, with sushi being one of the most healthy foods in the world and with the increased emphasis on healthy eating, sushi bars started flourishing across America.

But even so, many Americans were still hesitant to embrace eating "raw" fish. So sushi chefs started creating different types of sushi to cater to these "reluctant Americans".

This led to the beginning of what is now know as "fusion sushi" (the combining of multiple culinary traditions). One of the earliest examples of this can be seen in the California Roll, which is basically crab meat (which most all Americans will eat), cucumber, avocado and no raw fish.

Sushi is here to stay

It looks like Sushi is here to stay in America. And it is also now forever in-twined in the overall history of Sushi. All one has to do is go into any modern mainline well-stocked grocery store and you'll usually find a sushi section of one form or another.

Some will even have a sushi chef there that can make your sushi order to-go.

And believe it or not, I have even seen this in grocery stores in the deep-south...and have also personally witnessed on many occasions good ole' country boys whoofin' down on some sushi...

Now...how's that for convincing proof?

Back to the top of History of Sushi