Learn Everything you ever wanted to know about Sushi in one place in Simple, Straightforward Language --- without all of the "Sniffy" Fancy Sushi Talk!

Sushi for beginners shouldn't have to be difficult to understand.

Because, quite frankly, Sushi AIN'T  Wine.

-- You don't have to eat it with your little pinky lifted up in the air like the English do when they drink their cup of tea...

-- Nor do you have to swirl it around in a glass, and lift it up to the light so you can see if it has any "legs" either....

But...you couldn't tell that from some of the sushi information that I've had the displeasure of trying to decipher lately.

What I saw was a focus on all of the stiff "RULES and REGULATIONS" that you have to follow to order it and consume it and I thought, "Gee whiz, if anybody ever reads this they'll be shaking like a leaf if they ever decide to try sushi in a public place".

And I decided then and there that this just ain't right.

Somebody needed to spread the truth. So here I am. And here we are.

Know that, yes, there are "preferred guidelines" when it comes to sushi in general and the rules surrounding it's consumption in traditional Japanese public eating establishments but there is more to it than that.

There are rules, yes. But the application of them doesn't always apply in every situation. And some are sometimes bent. Some are always bent.

If you are new to sushi, and I am assuming that you probably are since you are on this page, I just wanted to catch you before "the experts" (and I use that term loosely) scared you off with all of their sniffy and stuck up rules and regulations.

You see, my mother is Japanese. I was raised in a Japanese home. I grew up eating real homemade Japanese food everyday.

So imagine my shock when I decided to put up this sushi website and found that what the experts said was "proper" and what was done by normal, everyday Japanese people...well, didn't always jive...

Many times there was a disconnect. And that's when I noticed that some of the stuff that people were being told about sushi was just plain old "stuffy" (that's the best way I can put it without getting Nastaay...)

So, as a disclaimer, I'm letting you know that, YES, when it comes to "proper" sushi etiquette and what you "should do" when you are in a sushi bar, etc., etc., yes, yes...those are covered by the two previous links.

If you want to know specifically about proper technique or manners when eating sushi in a sushi bar, then go  here or for a cliff notes version here.

But do note however, that I will also try to let you know what most normal everyday Japanese people do when they eat sushi too; so you won't feel guilty when you do put wasabi in your soy sauce or eat ginger with your sushi (both of which are horrendous "sushi sins" according to some "experts" (term used loosely...again... :-) that you may not be aware of but will soon understand)....

Either way, at the end of this journey hopefully you will be able to see FULLY both sides of the sushi coin (the prim and proper side...and the what real japanese people do side...)

With that, Let's start talking about sushi for beginners!

So, What is Sushi?

This is probably the number #1 most frequently asked question. And a good question if you have never eaten it or if you maybe just been wondering about what it actually is.

A good, quick answer is "Anything that is served with Sushi Rice".

Which would automatically exclude Sashimi (basically, just the slice of meat) because sashimi is not served with Sushi rice. And that actually is a major point of confusion for some. Even those who eat sushi all of the time.

If you are really interested in finding out more, visit our What is Sushi? page. It's enough info that it deserves to have its own separate page. You can also visit our Types of Sushi page for detailed discussions on all of the different types of sushi.

What is the Best Sushi for Beginners?

Another question that many people ask that are new to sushi is "What is the Best Sushi for Beginners?".

A lot will depend on what you like or dislike as far as seafood goes, or if you have any allergies to shellfish, etc., common sense stuff there really.

Beyond that, if you want to just get some ideas about what might be best for you to try so you can give Sushi a fair shot, visit our Best Sushi for Beginners page.

What are the Best Sushi Recipes for Beginners?

Those with the culinary touch or some that just want to try their hand at making some of the sushi that they have been eating out often ask this question.

Take a look at what I think are some of the Best Sushi Recipes for Beginners to start out on. 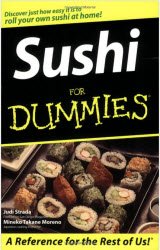 I bought and have read this book. If you want to know what I found, visit our Sushi for Dummies page for a Review!

And there you have it. Sushi for Beginners 101. I hope that it helps you get a good firm start in whatever direction you were interested in learning about in this amazing area of sushi.

Back to the top of Sushi For Beginners