What is expected and proper Sushi Etiquette?

Japan is a country Steeped in Tradition and History 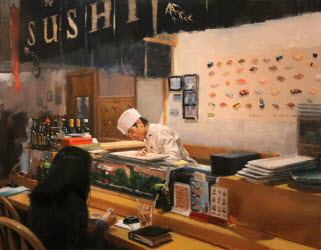 Sushi etiquette is as intertwined into Japan's history, culture and traditions as is the Japanese tea ceremony, cherry blossom festivals, and calligraphy. Many of these traditions have been passed from generation to generation for centuries and are so accepted and ingrained into life that they are just done without reservation or thought.

This however, has been slowly changing. Especially since we dropped the A-bomb on Hiroshima and Nagasaki, bringing an end to WWII and ushering in the influence of the western world.

My mother, who was only 9 years old at the time, was present when they dropped the bomb on Nagasaki. She along with her mother, sister and two brothers stood on the outskirts of the city and witnessed this event and also experienced the immediate aftermath and eventual recovery that literally took decades.

With the introduction of this American influence, came the slow "Americanization" of Japan.

Some things that had been hard and fast traditional rules, were now being relaxed...and some...totally abandoned. Even sushi etiquette rules have not been unaffected...

When my cousin, Kazushko (who was around 20 at the time), came to the U.S. to visit us, we went to a popular local Sushi bar. There he introduced me to his "younger generation" version of sushi bar etiquette. While waiting for our table, several Japanese business men in trim, black suits came in. They walked over and stood in front of another Japanese gentleman (seated and also waiting for a table), and proceeded to bow multiple times over and over again spouting rapid-fire Japanese. Obviously, showing tremendous respect to the older gentleman that was seated in front of them.

Kazushko punched me in the side, pointed at them and said, "Old Custom". To which I responded, "You mean, YOU wouldn't do that then"? To which he emphatically said, "No". And his NO was very firm.

His best friend at the time was a champion Sumo wrestler who asked Kazushko to pick up as many Izod shirts for him as he could legally bring back...

Older Japanese may even Relax Traditions at Home

Another example of traditions and change that comes to mind, is one about how the "experts" say to NEVER add wasabi to your soy sauce when eating sushi.

They say it is "improper", "impolite", and "shows disrespect" to the Sushi Chef. Blah, blah, blah.

After all, it says it in all of the Sushi books and is all over the internet. Right?

That is really quite interesting, because when I was growing up and ate sushi with my mother and her friend Miss Kimi (obviously Japanese) they always added wasabi to their soy sauce.

(Hello! Didn't they get the memo? The one on basic sushi etiquette 101?)

As a matter of fact, Miss Kimi added so much wasabi to her soy sauce that tears would fill her eyes whenever she at it.

"But how can someone who has a sushi website speak such blasphemy!",  I can hear some so called "experts" saying already...

to "them" I say --- that I base my views on my actual experiences living with a Japanese mother and eating with her Japanese friends and relatives, not on what I got out of book, read online or heard somebody else say.

And to actually make a point (and I think I still have one), we (the "experts" and I) both may be right. Let me explain.

Most of my early sushi experience was with Japanese friends and family in our Japanese home. And as you may well know, when you are at home, the tie comes off, you relax and you drink and you eat the way you want too. If you like ketchup in your pinto beans...well, by golly gee whiz, you drown your beans in ketchup at home.

I think the wasabi in your soy sauce example may be kind of the same thing. Would Miss Kimi have put so much wasabi in her soy sauce in a first class sushi restaurant in Japan? I'm thinking...mmm... probably not. Because, in that social setting she knows what is proper and expected.

So, what is the take-away here?

I think if you want to learn how to properly eat sushi in a sushi bar so that you won't embarrass your spouse, your friends, your host, everybody around you and maybe even the Sushi Chef, then do please read on.  It's probably a good idea.

But, if you are at home, with your friends, family and guests then it is ok to eat it and drink it however the heck you want to...just like Miss Kimi does... (within reason of course...)

With that said, let's be honest though. Do I put wasabi in my soy sauce when I am at a sushi bar? Yep. I sure do. But I put a little; not an excessive amount.

I went through this long winded explanation so that you would understand that there are really two sides to this sushi etiquette coin.

Both can, and sometimes probably will, be different.

With that final clarification, let's get to the real stuff by learning...

Well, whether you are reading this because you may be planning your first visit to a sushi bar/restaurant or you are an old pro looking to just brush up on a little sushi etiquette, you are in for a treat.

The sushi bar is a unique, one of kind experience full of tradition and history. So, first, just take a deep breath, relax and enjoy it. Don't stress out. It's really not as scary as you might think. A good Sushi Chef is not only a master of Sushi; but many are masters of creating a fun, enjoyable experience for their customers. Many are true entertainers.

There is so much to talk about that we have created a separate page for Sushi Bar Etiquette. We get into the actual nitty gritty dirty details of sushi bar etiquette execution. Go there to learn more.

How to Eat Sushi

There are "rules" for how you should eat your sushi. This is mainly tied to eating it out in public at a Japanese restaurant or Sushi Bar.

To get all the juicy details go to our How to Eat Sushi page.

Back to the top of Sushi Etiquette