Most people seem to like this kit based on most of the outside Reviews I have Read...
~~~
But is it because it Really is a good product?
~~~
Or is it because most people are Sushi Rolling Newbies who don't know what they are talking about? 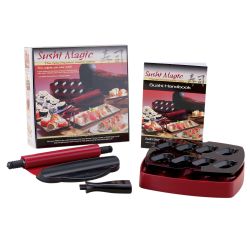 Well this is my 3rd review of non-traditional sushi making/rolling products and I'm hoping this isn't going to be a strike.

When I picked up the Sushi Magic Sushi Making Kit and started looking at the box, I shook my head wondering if this one was actually going to meet my expectations or not... Time to put it to the test... 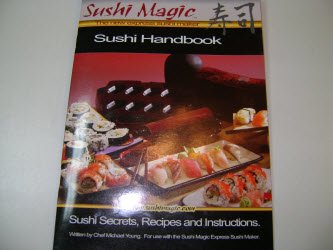 Well, my first impression was, ok... not too many parts to this thing. It looks pretty clean...

The mat was well made and easy to clean. And only 1 item out of the box to make your rolls with... that was encouraging.

Now, the 3 pieces (in the top left and right pictures) are all for making the nigiri sushi. So I pushed that to the side for now and opened up the included Sushi Handbook to see how to get started.

The Sushi Magic Sushi Making Kit Handbook was the most extensive instruction set that came with any of the 3 sushi making kits I had reviewed so far. Good instructions and nice pictures.

It has 23 pages and includes instructions for using the sushi mat (roller) and the nigiri sushi maker.

It also includes recipe sections for sushi rolls and nigiri.

I cracked my knuckles and said to myself, "You look good so far, but talk is cheap; Let's see if you're worth anything or if you're just another gimmick".

Again, I followed the instructions that came with the product. In this case, the sushi magic handbook walks you through making a california roll.

The first step was to cut down the nori to around 5x7 and lay it on the sushi mat (left picture above).

Next you spread your rice all the way to the edges of the nori and then flip it over. I went on and added wasabi across the nori once I flipped it over.

Condiments and ingredients are added...

Now we are ready to roll.

Start off by reaching to the handles at the far end of the mat and bring it up and over until it touches the nori in front of you (left and middle picture above).

If you can imagine what's happening here, the roll is turning over and getting rolled up while also moving you toward the front of the mat...

Keep rolling until you get to the front of the mat and then bring the roller bar over the peak and back down.

Bringing the bar all the way down on the far side of the peak and continued rolling (clockwise twisting of the handles) is what tightens your roll....

Unroll the mat, slice into 6 or 8 pieces and arrange on a sushi plate.

The picture below is of the California Roll that came in the handbook and is in the pictures above... Not bad, huh? 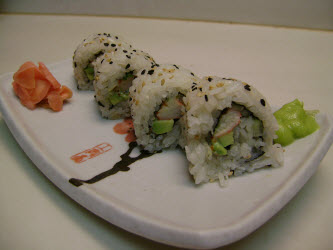 I was impressed with this sushi mat in the Sushi Magic Sushi Making Kit. It mimics traditional sushi rolling in that you actually do roll and tighten your roll at the end.

And it may actually make rolling a little easier because of the way it is designed. I think that this design makes it harder for you to mess up your roll too if you follow the instructions than if you were rolling with a traditional bamboo mat.

In other words, I think it may be easier for someone to make a sushi roll with this device than it would be with a traditional sushi mat.

It also is made out of some kind of plastic or vinyl which makes it easier to clean than a traditional bamboo sushi mat.

Well, it looks like the sushi mat in the sushi magic sushi making kit has made a good impression on me, but what about the nigiri sushi part of the kit?

You begin by placing your seafood in the depressions of the red base mold. I added a swipe of wasabi to the 2 pieces of tuna (left picture above).

Then you position the black funnel plate on top of the red mold (middle picture above) and spoon 1 heaping teaspoon of sushi rice into the top of each funnel (right picture above).

Next you take the black press tool and push the rice down through the funnel into the mold underneath (left and middle picture above).

The black funnel plate is removed (right picture above).

To remove the pieces of nigiri, a plate or some flat object is placed on top of the red mold (left picture above) and it is flipped over.

The narrow end of the black press tool is used to push the nigiri out of the mold so that it drops out (middle and right pictures above). 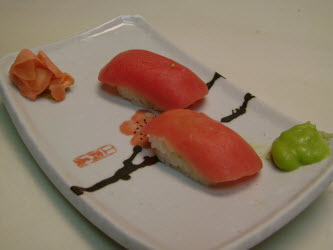 These finished nigiri were placed on this sushi plate just the way they were dropped out of the mold.

For someone who has a hard time forming nigiri sushi by hand, this may be the answer. It was easy, simple, quick and looks very nice.

The Sushi Magic Sushi Making Kit is something I am definitely going to continue to use.

I do want to see how it does on making different sizes and types of rolls like a hosomaki (thin roll, 1 ingredient) and futomaki (thick roll, 4 or 5 ingredients) though before I make a final decision.

I'm actually a little afraid it might replace my favorite bamboo sushi mat at this point! (My mother may not talk to me anymore if I do; so I might have to use it in secret :-)

I was also surprised by the nigiri sushi mold too. I didn't expect it to be so easy to use and and the nigiri to look so good.

This product does what I think a product needed to do to get a recommendation from me.

It looks to have made the sushi making process a little easier,  more consistent and maybe even a little more enjoyable.

Recommendation: The Sushi Magic Sushi Making kit is a definite buy. Go get it! What are you waiting for!

Sushi Magic is the creation of Chef Michael Young who is also the Inventor and the President of Food Adventures, Inc.

I had the pleasure of talking with Michael over the phone on several occasions about his product and the interesting process he went through to create the Sushi Magic Sushi Making Kit.

He first started by recognizing the need for a more modern product that could make the process of making sushi rolls and nigiri easier; especially for the novice. Then he took that vision and after 5 years, turned it into what I think is the best modern variation of a modern day makisu (traditional sushi rolling mat) that there is while also eliminating one of the biggest problems with the traditional bamboo rolling mat - clean-up.

But he didn't stop there... He created a rather ingenious way of duplicating hand formed nigiri, without using your hands! And the results speak for themselves. Just look at the pictures above!

Back to the top of Sushi Magic Sushi Making Kit