What is Sushi?
~~~
There's no need to be Confused about it anymore...You Can know for Sure!

So. You want to know just what is Sushi?

Take a minute to look at the images above with me.

The leftmost picture is of "Chirashi-zushi" or sometimes called scattered sushi. That is because it is "loose" and just mixed with various food items before serving.

The middle picture is of "Maki-zushi" or more commonly known as a Sushi Roll. You may already be most familiar with that one.

And the rightmost picture is "Nigiri-zushi". Basically an oblong formed piece of rice with some kind of a topping -- normally some kind of seafood. But can be other things, like a Japanese omelet.

But they all have one thing in common. They all are made with Sushi Rice.

And by definition, that's basically what Sushi is "Anything that is served with Sushi Rice".

So now you know what is sushi. If you want to learn more about the different types of sushi go here. 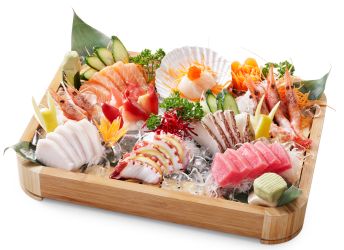 Sashimi and Sushi are not the same thing. Notice in the picture above that everything is a meat. The white stuff that it is sitting on is not rice but rather daikon.

Sashimi is basically just the meat. And there is NO sushi rice involved here. Typically it is seafood but not necessarily (there is chicken and horse too--yeah I'm not that adventurous) and it is normally served with a shredded white japanese radish called "daikon".

Sashimi is usually dipped into soy sauce or soy sauce mixed with wasabi or a sauce called "ponzu" which may be provided then eaten with some daikon.

Go here if you want to learn more about the difference between sushi and sashimi or just about Sashimi in general.

Back to the top of What is Sushi