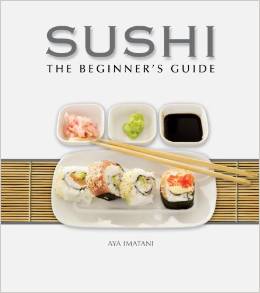 This book pens itself as a sushi book for beginners. I think it is good that there are authors and publishers willing to write a book that is geared to the beginning home sushi chef.

Many times sushi books (especially those for beginners) will showcase recipes that are obscure, flashy, and showy which seems to only spotlight the sushi making skills and "amazing" creativity of the author with little concern for the home reader and whether they will even have the skills to be able to duplicate it at home.

And what good is that?

You can't lick the page of the book to taste the beautiful creation because you surely won't be able to find the ingredients you need to be able to make it anyway... and if you do, it will more than likely be beyond the skill level of a beginner.

With that said, we will mainly review this book based on whether it delivers on its most obvious intention which is stated on the cover.

Is "Sushi the Beginner's Guide" really a good book for beginners?

First, a few details about the book.

Pictures: Yes. Quite a few. Nice and professional.

Sushi the Beginner's Guide starts off with an introduction from the author who goes into his childhood and how he learned to make sushi in his fathers sushi bar in Kobe, Japan filleting his first fish at the age of 5.

His life and experiences continued on from there and as you can guess, he has gone on to do it for his entire life. Currently, he explains that he has a Japanese catering business and lives outside of Japan serving mainly non-Japanese clients.

This is good I think because it gives him an understanding of what most Americans like versus what most Japanese would like. This,  many times, is different. So it is an important aspect to have when writing a beginner's book on sushi that is mainly marketed to an American audience.

So did it result in good beginner's sushi book?

The basics like tools, ingredients and tableware are covered adequately. There is no extra fluff here just good explanations of the most common items are covered.

The basics of picking out a whole fresh fish and how to fillet them are also covered well. There are nice, clear pictures to follow here.

Sashimi is covered although it is not technically "sushi". Also covered is  how to slice it along with a few basic recipes.

Sushi rice (obviously) is covered and I was very happy to see that he includes both Kombu AND sake in the making of his sushi rice recipe.

This is the ONLY other recipe I have seen that uses both of these ingredients besides my mothers recipe. It is similar to her sushi rice recipe  except that my mothers recipe uses more sugar and less salt.

Sushi rice made with lower amounts of sugar and more salt generally are said to go better with stronger toppings and visa versa.

With that said, the one in this book is still an excellent recipe (especially with the sake and kombu), we just disagree on the amount of sugar and salt to add. My advice would be to try to both. The one in this book and my mother's sushi rice recipe and see which you like the most.

More than likely you will immediately know which you like better.

The rest of the book goes over how to make nigiri (which has nice easy to follow pictures) and variations of how to make common hosomaki, temaki and futomaki rolls.

The author, in my opinion, does keep this book at the beginners level pretty well and doesn't use the book just as a platform to try to show off his skills.

I don't have much to complain about with this book.

If I had to nit-pick, the only things I guess I wished it had would be:

I really liked this book. Especially for beginners, but also for the experienced at home sushi chefs also. All skill levels will learn something from this book.

It is also very reasonably priced, well written, and has excellent and clear pictures for the beginner.

I highly recommend this book.

If you want to buy "Sushi The Beginner's Guide", they have it for a very good price (around 10.00) right now on Amazon.

But before we end this discussion...

I want to put a bug in your ear.

If you are a beginner and would like to have two of the best beginner sushi books in your library that are out there, you can get both of them together for a little more than $20.00.

This one, "Sushi The Beginner's Guide" is one them. This one I would get mainly for the clear explanations and step by step pictures.

The other one that I would recommend is "Sushi for Dummies". It doesn't have the great pictures that this book has but I think it fills in any of the "gaps" that this book might have.

About things like sushi etiquette, history, more recipes and lots of other subjects. The dummies book goes into a lot more wordy depth on almost every subject. (see our Sushi for Dummies book review here).

You can buy "Sushi for Dummies" here on amazon.

Both of these books complement each other and with both of them you probably would never need to buy another book on sushi ever again...

Back to the top of Sushi for Dummies