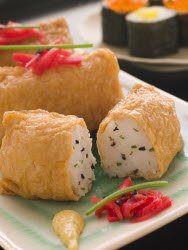 Inari sushi is made by filling a pouch of seasoned fried tofu (abura age)  with Sushi Rice. It is named after the Shinto god, Inari who is said to have had a fondness for tofu.

It is also said that the Japanese were the first to develop tofu pouches but little is really known of the early history. There is mention of a deep fried tofu recipe in Todu Hyakuchin which was a Japanese recipe book written and published in 1782 during the Edo period. And it is also known that Inari-Zushi was created in 1853.

Deep fried tofu pouches became so popular in Japan that by the 1980's 300,000 to 450,000 pouches were made every day and roughly 1/3 of the soybeans used for tofu were used for the deep fried pouches.

Either way, all I know is that it was one of my favorite types of sushi when I was growing up (my mother is Japanese). Many times I would get one in my lunch box or as a snack after school. Yum!

Make this for your kids once, and I bet they will be hooked on it.

Although very popular in Japan, Inari sushi is just now making its way into America. This is a surprisingly easy type of sushi to make and will make a lasting impression on family and friends. Firstly, because of its unexpected salty, sweet taste and secondly because they probably have never had it anywhere else because it is only now making its way into U.S.

The abura age is made by cutting tofu into thin slices and deep frying at 110~120 °C and then again at 180~200 °C. It can be purchased in packs of 2 to 4 in the refrigerated section of Japanese or Asian Markets or can be purchased already seasoned in cans (called inarizushi-no-moto), ready to drain, stuff with sushi rice and eat.

To learn how to make this, visit our Inari Sushi Recipe page.

Back to the top of Inari Sushi