Largely overshadowed by its use in making Dashi, Kombu also has other uses as well as extra added Health benefits to boot! 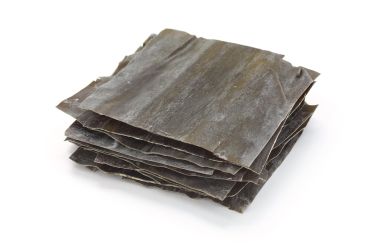 So, what is Kombu?

The technical definition is that kombu is an edible kelp from the brown algae family known as Laminariaceae. It is eaten widely in most east asian countries including Japan. 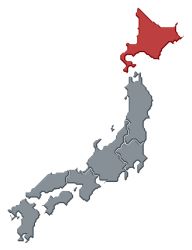 Most is actually cultivated on ropes in the seas of Korea and Japan.  Over 90 percent of the Japanese variety is harvested from around Hakkaido, which the the largest northern most island of Japan.

Although it is very difficult to pin point the exact time period when Kombu began to be eaten in Japan, there have been some plant remains of seaweed such as wakame found in some ruins of the Joman period (prehistoric Japan from 14,500 B.C. to 300 B.C.) which leads some to believe that it was eaten at this time also.

During the Muromachi period (between 1337 to 1573), a new drying technique allowed it to be stored for more than a few days and it became an important export from the Tohoku area. 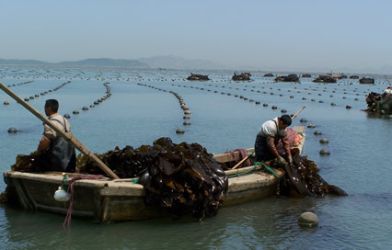 In the 20th century, a way to cultivate it had been discovered which made it cheap and readily available.

Kombu is an excellent source of fiber, minerals and vitamins A, D, E, B-Complex and B12. And actually, compared to land plants, marine algae have as much as 10-20 times as much of these essential vitamins.

It is also a good source of glutamic acid, an amino acid and a neuro transmitter, which is important for learning and memory.

It also contains iodine, a mineral essential for normal growth and development.

Kombu can be used all kinds of ways in cooking. It can be used to make tea, or pickled, or even added to the rice used for sushi rice during cooking.

But perhaps its most notable use is in making Dashi, a common soup stock used in Japan similar to the way that we use chicken stock here in the United States.

There are actually multiple variations of dashi all of which are made with some combination of the following ingredients:

The following recipe is for making the most widely used and most common, Awase dashi.

And if you're not into the old school way, you can get instant dashi now that comes in granules. This is a little more convenient if you would rather go this route. You can find this in most Japanese or oriental markets or they have it here at amazon.

2 Tbsp Sake (alcohol will cook off)

(the reason for this: In the U.S. 1/2 cup may be good to start with. It will make dashi with less "fishy" smell and flavor. In Japan, they tend to like a stronger fish flavor so up to 2 cups is possible there. That's why it is up to you. Experiment and adjust according to your liking.) 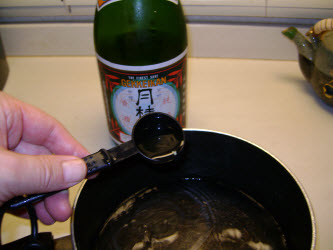 2. Place the pot over medium heat. Just before the water starts to boil, remove the pot from the heat and put the katsuobushi evenly over the surface of the water.

3. After about 3 or 4 minutes, strain the stock through a strainer with a cheesecloth or coffee filter in it.

Dashi can be placed in a tightly covered container for several days.

This is debatable but worth mentioning. Some say that freezing dashi causes it to lose some of its flavor, but my mother (who is Japanese) use to do it all of the time.

As with anything though, I think everything tastes better when it is fresh rather than after it has been frozen so what's the difference here? This is a personal choice. Give it a try if you want to keep your dashi for longer than just a few days in the refrigerator and see if it still tastes good enough for you.

At this point, you are on a roll baby!

Now's the time to go ahead and make a second round of dashi, called Niban Dashi (or second sea stock).

This type of dashi can be used in miso soup and various other dishes where it can be blended with the other flavors and where a little drop in the taste of the second round dashi won't be noticed so much.

Basically, its just a way of milking everything out of the ingredients that you already have to make more, at the sacrifice of a little flavor and a cloudier appearance.

Ingredients just used in making the Ichiban dashi (if you can't find it, it should still be in your strainer...  :-)

1. Combine the water and all of the ingredients in the pot again. 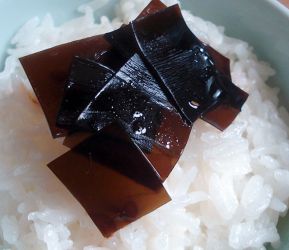 Tsukudani are dishes made by simmering ingredients in a flavored soy sauce based soup usually made of Shoyu soy sauce, Sake, Mirin, Rice vinegar and Sugar. This mixture ends up tasting both salty and sweet.

Leftover kombu from making dashi can be used to make this side dish which is good as a snack, on top of rice, or as a filling inside onigiri (rice balls).

Most recipes for this use water and not dashi, but I like using dashi better. I think it gives it a better, richer flavor. If you don't want to use your dashi for the following recipe, then substitute water...

2 tbsp sugar (more or less depending on your preferred taste)

2. Cut it into squares, triangles or slivers (if you want to make for onigiri (rice balls).

4. Reduce heat to lowest setting and add kombu to the pot. Cover and simmer for 18-20 minutes. Stir occasionally to make sure it doesn't burn.

6. Try a piece. When it is done, it should be like "Al Dente"; firm but still soft like pasta.

And you should be able to bite off a piece easily without having to tear it;

if you do have to tear it, then add another 1/2 cup of dashi and cook it another 20 minutes.

Now, eat it on top of rice, or as filling in onigiri.

Back to the top of Kombu