One of the main Ingredients used in Sushi Rice has an interesting History as well as many other applications and uses...

Stay Tuned to find out what they are! 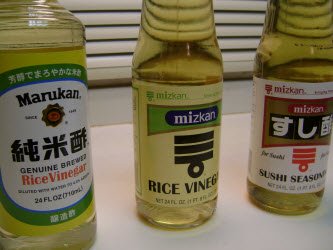 To learn about Rice Vinegar and where it came from, one must actually go back to the origins of vinegar itself.

Japanese Rice Vinegar - What is was...

Real Japanese rice vinegar, is around 4% acidity. Less than many fruit-based vinegars like plum, tart cherry and persimmon which are many times made at home and also less than the blended variations that have all but replaced it.

The reason I say this is because most vinegar used in Japan today is actually a blend of wheat, corn and rice vinegars with sake lees (also called sake kasu---the thick rice paste that’s left at the end of the sake-making process) and alcohol added in for good measure; not the true original version.

Large mass producers, Marukan being one, is an example of these "modern" blended variations.

These new variations have become widely accepted however, and the distinction between the "true" original and these blended varieties is almost never even noticed or better yet, probably not even known anymore.

Today, "Komezu", ranges from being colorless to a pale yellow and is very mild and mellow (having around 5% acidity).

They are used to make sunomono ("vinegar dishes"), tsukemono ("pickles"), nimono ("simmered dishes") as well as in marinades and sauces.

The seasoned variety or "Awasezu" is made by adding Sake, Sugar and Salt to Komezu. It is then used in making sushi rice and salad dressings like ginger or sesame dressing.

Vinegar has long been accepted as having many medicinal health benefits. Ranging from reducing blood pressure to being used a skin tonic.

One that is also notable to mention however, comes from a lighter form of black vinegar called kurozu, which is made from rice and is considered to be a healthy drink.

What is interesting about this is that it's manufacturers claims that it contains high concentrations of amino acids (9 are essential because they cannot be created from other compounds in the human body). And recent studies seem to support this. Scientific research on kurozu has revealed its anti-cancer properties in rats in vivo (in whole living organisms) and in vitro (on components of an organism) on human cancer cells.

It seems that vinegar truly does have more benefits than just making Sushi Rice taste good.

Back to the top of Rice Vinegar