Find out what Soy Sauce is, how to make it and
how Gluten Free is different...
Then learn
~~~
What ingredients are in it, how it is Brewed
and
How to make your own Substitute for it! 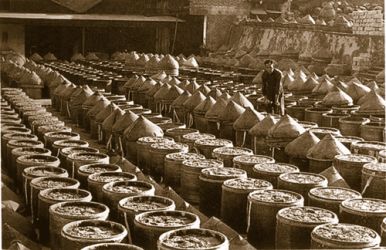 Soy Sauce is a popular world-wide condiment that originated in China somewhere between the 3rd and 5th centuries. It is made from the paste of boiled soybeans, mixed with some type of roasted grain (normally wheat, barley, or rice), brine (salt mixed with water), and Aspergillus sojae or oryzae molds.

It is left to ferment for several months after which it is pressed and strained before being bottled.

In general, most tends to have a slightly earthy and salty flavor. Consistency can also vary from thin to very thick and in color  from a light brown to almost black. As with consistency and color, flavors can also vary widely from light and salty all the way to thick and sweet.

All of these different combinations are usually made by altering the method and duration of fermentation along with changes to ratios of water, salt, mold and other ingredients.

Throw in that it is being made in many different countries including Japan, Vietnam, Burma, China, Taiwan, Korea, and Indonesia with all of them varying ingredients and fermentation methods and the combinations are almost limitless.

The first mention of soybean Jiang appeared in the Ch'i-min yao-shu around AD 535. Its use later spread East and to Southeast Asia.

The earliest mention of soy sauce in Japan was from AD 775 and had probably traveled east from China with the spread of Buddhism. Its use continued to spread, most likely due to traders and Chinese settlers, with varieties in southern countries evolving into a thicker product sweetened with molasses.

In 1737, records from the Dutch East India Company mention it as a commodity when 75 barrels were shipped from Dejima, Japan to Jakarta on the island of Java and another 35 barrels were sent to the Netherlands.

Although here in the west we purchase our soy sauce, it is very common for those in China and Southeast Asia to prepare their own  once a year since there is no need for a pressed extraction to make it.

See the homemade soy sauce recipe at the bottom of this page if you are the daring and experimental type :-)

Most is made with 4 basic ingredients.

Aspergillus sojae or Aspergillus oryzae molds and yeasts are also added to activate the fermentation process which actually creates it.

Let's briefly review each ingredient and its role in the brewing process. 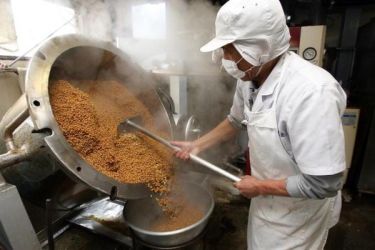 Soybeans are soaked in water and boiled or steamed until they will crumble  when pressed. 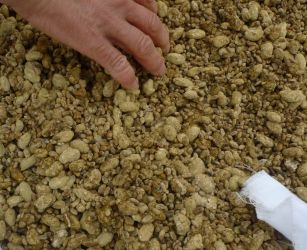 The boiled soybeans are mixed with roasted wheat, Aspergillus (mold), and yeasts to form a mixture called "Koji". This mixture is usually allowed to sit uncovered for a couple of days.

Water and Salt are added to the "Koji" to form a mash called "Moromi". This "Moromi" is placed in an air-tight container and allowed to ferment for up to 6 months. Over time, the mold breaks down the soybeans and wheat into free amino acids, protein particles, and simple sugars. The reaction caused between the amino acid and simple sugar is what gives soy sauce its dark brown color. 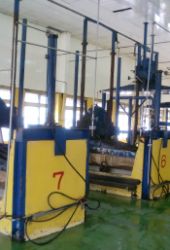 When the moromi is fully fermented, it is put in cloth lined containers and pressed to separate the solid from the liquid. The solids can be fed to livestock or used for fertilizer and the remaining liquid is processed further. 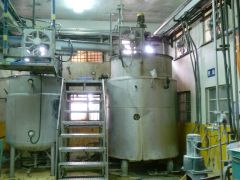 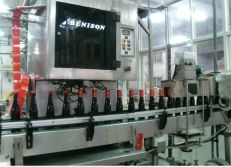 At this point, it can be immediately bottled or it can be further aged and bottled later. 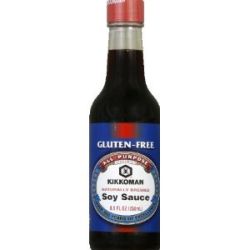 Most varieties of soy sauces contain wheat which contains gluten.

The wheat is usually roasted and crushed and added to the boiled soy beans and Aspergillus mold to create a mixture called "Koji" which is used during the brewing process.

For those who are medically intolerant to gluten, this makes it impossible to consume most types of soy sauce.

Fortunately there are some available now that use rice instead of wheat, making them gluten free.

Kikkoman has a very good gluten-free variety that you should be able to find in your local supermarket. If not, you can get it here at Amazon.

If you are so inclined, you can try your hand at making your own just like many of those in China and Southeast Asia still do to this day.

1. Blend the boiled soybeans (soybeans only, no pods) in a food processor until it forms a paste (optional) or you can just go ahead and mix the whole boiled beans in the flour as shown in step 2. 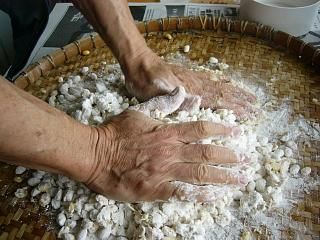 2. Mix the soybeans or soybean paste and flour together until well mixed.

3. Knead the mixture thoroughly. Turn it out onto a flat surface and form it into a log type shape. 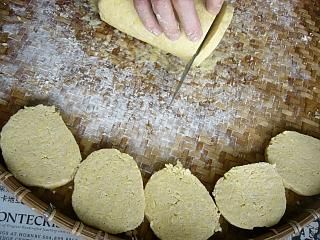 5. Moisten some paper towels and lay them out flat.

7. Wrap this entire "stack" in plastic wrap very thoroughly so that no air gets into it.

8. Place the entire stack onto a baking sheet or something flat and put it in a dark area until it is completely covered in mold. This could take a week or more depending on environmental conditions (heat, humidity, etc.,) 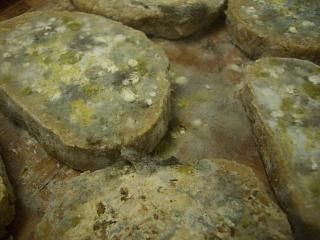 9. Now take the disks and place them an inch or two apart on a baking sheet or flat surface. Let them dry completely, until they turn brown. Direct sunlight from a window or something like that is best.

10. Mix the salt and water in a container or pot and mix until the salt is dissolved. Now add the dried disks to the pot and cover loosely.

11. Allow the mixture to ferment.

12. Mix it once a day. When the disks are completely dissolved the fermentation is done. This can take several weeks up to several months.

13. Now strain the mixture through a cheesecloth into a container.

And there you have it.

Recipe for a Soy Sauce Substitute

This is a good recipe if you are avoiding soy because of health reasons. You can also substitute any of the below ingredients with an allergen-free version if desired.

Put all of the above ingredients in a small pan over medium heat. Boil gently until the liquid is reduced to about 1 cup (about 15 minutes). If desired add sea salt or regular salt to taste.

Back to the top of Soy Sauce