Find out the differences between three of the most popular Sushi Molds...
~~~
The Onigiri mold, the Nigiri Mold and Oshizushi mold ---
all in one convenient place...
~~~
Right Here!

A Sushi Mold is a plastic or wooden mold that is used to make different kinds of Sushi.

Some like the Nigiri and Onigiri mold are more for convenience rather than out of necessity because they can be formed by hand, while the oshizushi mold is for pressed sushi and must be made in the specially designed wooden or plastic box.

With that, why don't we start with the Oshizushi mold.

Oshi Sushi or Oshizushi is a type of sushi from Osaka, a part of the Kansai region in Japan. It means "pressed sushi" but can also be called "box sushi". Look at the middle picture above to see an example.

As you can see, it is one of the "prettiest" versions of sushi that you will see. It is also one of the oldest forms of sushi and stems from the ancient method of preserving fish by packing it tightly in boxes with fermented rice.

A wooden sushi mold, called an oshibako is used to make this form of sushi. 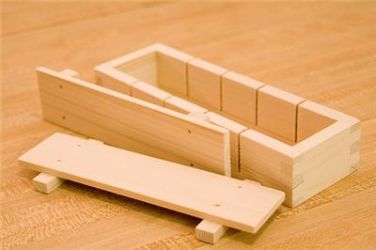 The Oshibako is used by alternating layers of sushi rice, condiments, and toppings which are then pressed with a wooden top in between each layer. The final layer of toppings is pressed and then the compact sushi block is sliced using the grooves visible in the sides of the box above.

The sushi is then pushed out of the bottom of the mold and given any final slicing needed before serving.

A traditional sushi mold is normally made out of wood, mainly cypress or cedar, similar to that used for the Japanese sushi rice mixing tub (or Hangiri).

But today they also have plastic molds which are convenient and easier to clean.

If you are serious about giving this type of sushi a try, you can find Oshizushi molds on Amazon.

Next, we have Nigiri Sushi. I guess you could say that Nigiri sushi is what really broke the ground on the method of sushi rice preparation using rice vinegar that we still use today as well as the custom of serving raw fish in combination with it.

It was created by a man named Hanaya Yohei around the year 1824 in Edo, Japan (which later became Tokyo). At that time, a new fermentation process had just been developed which consisted of adding rice vinegar and salt to freshly cooked rice and allowing it to sit for only a few minutes before serving.

Seeing an opportunity to take advantage of the demand, Yohei put a stall near a busy bridge which crossed the Sumida river in the Ryogoku district of Edo and opened for business.

Being close to the river, he was able to obtain fresh fish which he quickly filleted and laid over hand-formed, palm sized pieces of rice which was sold to passing pedestrians.

It was a huge hit...and the rest as they say...is history.

For the home sushi chef, making these oval hand formed pieces of rice for Nigiri can sometimes be challenging so soon came the development of the Nigiri sushi mold (See pictures above).

To use these molds all you have to do is press sushi rice into the mold and then push them out or drop them out by turning the mold over and hitting it lightly against the counter. If you don't know how to make sushi rice, you can learn by following our sushi rice recipe.

All of the nigiri molds that I have seen are made of plastic and are available on Amazon if you are looking to get one.

One of the best nigiri molds I have used is included in the Sushi Magic Sushi Making Kit. Check it out.

Just looking at the middle picture above of the onigiri reminds me of the ones I use to get in my lunch box when I was growing up in Japan. It brings back such wonderful memories.

In Japan the school would take lots of field trips too. One of my favorite places to visit was Mt. Fuji. I'm sure you've seen pictures of that famous snow-capped Japanese mountain before, even if you didn't realize what it was called. My Mom always put onigiri in my lunch box for those trips. Funny how we tend to relate memorable childhood experiences with food :-)

Anyway, there were two fillings that I remember being my favorites. One had the red japanese plum called Umeboshi in the middle of it. It kind of has a salty/sour taste to it. The other was called Okaka or Katsuobushi (dried bonito flakes used to make dashi) and it was made by mixing Katsuobushi with soy sauce. Although this original version is good (and the way most recipes make it), my mother also added a little sugar to it and made it salty/sweet which I think made it ohhh, so much better.

I've never seen anybody else's recipe include the sugar, but I tell you its better than the soy sauce only variation. Trust me on this. Or better yet, Just Try it!

Onigiri (or just rice balls) need to be made with plain cooked white rice. The same kind of rice that you would use to make sushi rice. To learn how to make this common Japanese staple, check out our onigiri recipe page.

If you don't want to hand form your onigiri, you can get an onigiri sushi mold here at Amazon.

Back to the top of Sushi Mold