Zojirushi Rice Cooker
~~~
Are You Considering a Zojirushi but Wondering if it is any Good?
~~~
Maybe You're Confused by all of the Styles, Models, Features and Functions that are available,  What they do for you and whether you'll need ANY or ALL of them?
~~~
Well, Stick around and we'll Try to Clear Things up for Ya! 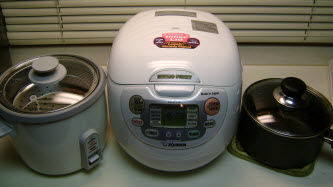 A Zojirushi rice cooker is what I would consider the Cadillac of rice cookers. The best of the breed. Models range from simple one-button cookers to serious rice cooking machines that look like you might need a PhD in electronics to operate... (Ok, maybe their not that hard to operate :-)

I personally have two Zojirushi's. A simple one button one (NHS-10 6 cup) on the left above, and a fancier one (NS-ZCC18) in the middle above that uses the "fuzzy logic" technology.

(do you have a favorite zojirushi cooker? tell us about it here)

And of course, let's not leave out the lonely little pot on the right that, though not the subject of this page, has been a loyal and good rice cooking friend over the years...

Do You Need a Rice Cooker to Cook Good Rice?

While we're at it, let's not fail to mention that a zojirushi rice cooker, however simple or fancy, is NOT required to cook excellent sushi rice. As a matter of fact, on my sushi rice recipe page I demonstrate making sushi rice using the trusty old pot in the picture above on the right.

Reason is, I don't want people to think that you have to invest in a zojirushi rice cooker to make good sushi rice. You don't have to. Just a plain old pot will do...

But I do have to admit that most days now when I make sushi rice I use the fancy one in the middle above. I just love that unit.

And rice cookers can make the job a little easier by making it more consistent especially when you are switching from cooking different kinds of rice like short grain white, long grain white, short grain semi-brown or just plain old brown rice to name a few.

If you have decided that you are wanting a premium quality rice cooker and Zojirushi is the one you're considering, then we'll try to clear the fog and help you focus on a unit that either best fits your budget, has all the bells and whistles that you are looking for... or both.

There's one other type of person who might be here too... because I think it was me when I started looking at getting a Zojirushi rice cooker...

That person was a little confused by the difference between conventional, neuro fuzzy, micom, induction heating and induction heating pressure systems and what you really need for the type of rice you'll be cooking.

Either way, we'll try to point you in the right direction.

Let's start out with the little chart below that I created for you. We'll be referencing that quite a bit as we move along...

But first, let's go over what might be the main limiting factor for some... Price...

If price will be the main deciding factor for which Zojirushi rice cooker you end up buying rather than what bells, whistles and features are available, then concentrate on the units below that fit within your price range.

Hopefully the price won't limit you from getting the features you may be looking for.

And just so you know, usually (or at least for premium short grain white rice) the cooked amount ends up being roughly double the measured amount. In other words, if you measure 1 cup of rice, you should get about 2 cups of cooked rice... moving on...

If your price range is below the price for the zojirushi rice cooker on the far right in the chart below, the NHS-10 6 cup (like the one I own) is about half that price at around $57.00 and can be purchased at amazon here. That should give you even more lower priced options. 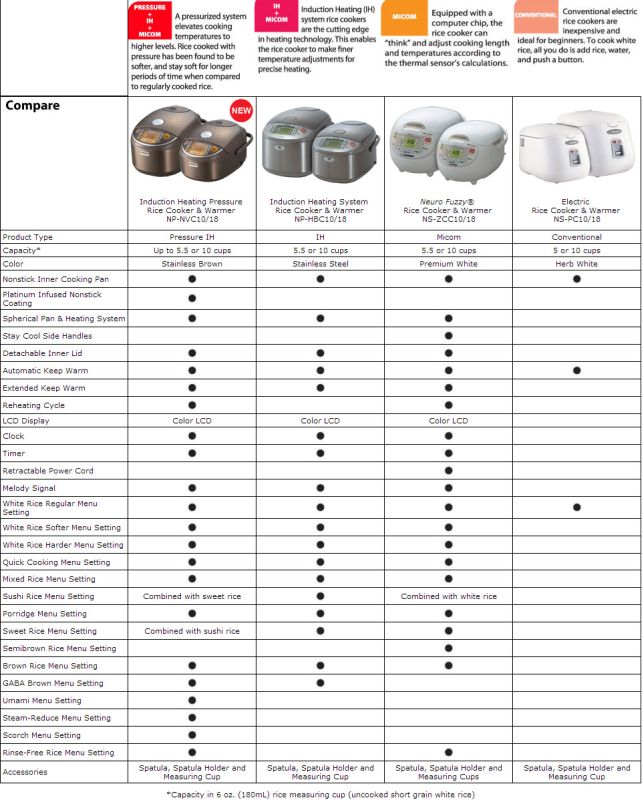 Conventional units (far right in the chart above) like the NS-PC10/18 and NHS-10 6 cup are the lowest priced and simplest of the Zojirushi rice cooker (s).

The heating source is located in the bottom and the unit turns on and off in reaction to temperature only. As you will see later, this is the most basic of cooking control methods and indicators. Some units may have a keep warm function also.

Cooking with a conventional can be best compared to cooking your rice in a pot.

What you will have to Handle on your own with a Conventional Zojirushi Rice Cooker...

What the Conventional Zojirushi rice cooker is not capable of adjusting for You... 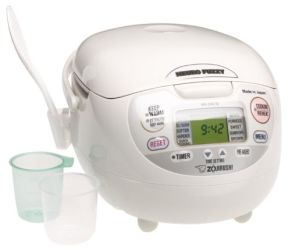 The micom units NS-ZCC10/18, which Zojirushi also labels as "Neuro Fuzzy" uses advanced microchip technology to allow the rice cooker to "think" for itself and make adjustments to temperature and heating time during cooking.

It does this by taking into consideration the type of rice you are cooking to adjust for the initial pre-soaking of the raw hard rice grains before cooking as well as the final "wait & steaming" period required at the end to cook the best rice possible.

This is the unit that I have and use to cook my rice for sushi along with many other types rice and it does a great job with anything you put it in... it truly is "plug and play"...

Since you are probably trying to figure out which one of these between the different types of units you need or will be happy with, I'm comparing them and telling you what each has or doesn't have compared to each other. I hope that helps...

And do keep in mind that ALL of the following units, Micom, IH+Micom and Pressure+IH+Micom have this "Neuro Fuzzy" advanced microchip technology.

What the NS-ZCC10/18 Micom units don't have that the more expensive IH units do have...

What the NS-ZCC10/18 Micom units do have that the more expensive IH units don't have...

Is a Micom "Fuzzy Logic" Zojirushi rice cooker (NS-ZCC10/18) the right one for You?

If this sounds like the right one for you, you can get your hands on this unit for a pretty good price here on Amazon.

If you looked at the previous section, you know how these units compare to the standard Micom unit (with no Pressure and IH).

Basically here I think you really only need to know what IH (Induction heating is) and what it does and also what  the "Pressure" feature is and what it will do for you.

Since the "Pressure" option comes at a whopping $200 in additional cost, I'm sure that most people will have to be pretty convinced that it will add that much value for them before they will throw in those extra dollars to get it. Well, unless you are independently wealthy... which I'm not :-)

So without further ado, let's get to it.

What is IH (Induction Heating) and What does it do?

Induction heating basically adds another dimension to how the rice is heated. Whereas the heating element is normally located at the bottom of a rice cooker, IH turns the whole inner cooking pan into a heat conductor. This allows for higher, more precise and more uniform cooking temperatures.

Induction heating occurs when a magnetic material enters a magnetic field. This is recreated by passing an electric current through coils located at the bottom of the rice cooker's body. As the special, 2-ply inner cooking pan is placed inside, a magnetic field is created which in turn generates instant heat. The entire cooking pan becomes the heat source, with the ability to cook at higher temperatures, which can be turned on and off instantly for greater control.

So. Should you get a Zojirushi rice cooker (NP-HBC10/18) with Induction Heating?

If induction heating is something that you need, you can get it at Amazon here.

What is this "Pressure" Option and What does it do?

You ever own a pressure cooker? They've been around for as long as I can remember. Most had the turn and lock lid and the little thingy on top that rolled and popped and spewed a little steam out of the side or bottom so it basically wouldn't explode. It's old technology.

But it's pretty much new to rice cooking. Look at the diagram below. 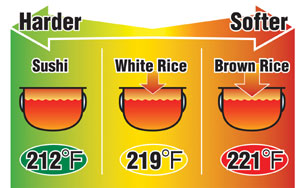 Supposedly, rice cooked with pressure has been found to stay soft for longer periods of time compared to regular cooked rice. As the pressure builds inside the unit while the rice cooks, the boiling point of the water is increased to beyond the normal 212 degrees F.

Once water is allowed to boil, it can't be heated further; but inside a pressure sealed environment higher temperatures can be reached which allows better penetration of the rice all the way to it's center.

Should you get a Zojirushi Rice Cooker with the Pressure Option?

You can get this unit at Amazon too.

So. What do you think?

Was this page helpful? Did it help you narrow down your choice of the right Zojirushi Rice Cooker?

Or better yet, write your own review page for a Zojirushi you already have.

Do You Have a Favorite Zojirushi Rice Cooker? Tell Others about it!

Your experiences with your Zojirushi can help others make an educated choice. Your opinion matters! Good or Bad.

What Other Visitors Have Said

Click below to see contributions from other visitors to this page...

Micom "Fuzzy Logic" Zojirushi rice cooker (NS-ZCC10/18)  Not rated yet
Best rice cooker ever! Truly the Cadillac of all rice cookers. Nevery had any issues with it and perfect rice everytime! Absolutely love my rice cooker! …