What is Sushi Rice?
~~~
What makes it different from other kinds of Rice?
and
Why is it so important for making Good Sushi? 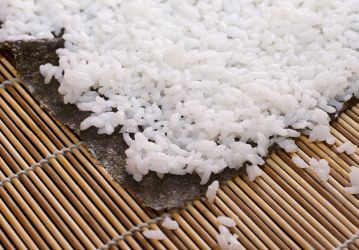 Good sushi rice is the single most important aspect of making Sushi --- Well, at least any kind of Good Sushi that is...

(do you have a favorite rice you use to make sushi rice? tell us about it here)

This is the Sushi foundation upon which everything else is built upon.

It is so important, that when my Japanese mother asked one particular Sushi Chef for his recipe he responded by saying,

Now, this was actually pretty close to the actual response that this Sushi Chef gave to my mother when she asked for his recipe (she asked because his rice for sushi really was that good). And it was also at this point that she realized that not all of it was created equally. This Chef was actually the Itamae (Head sushi chef) in one of the top first class Sushi bars in Osaka at the time.

Being that my mother can be very persistent (to the point of total irritation at times :-), She did get hints from time to time from some Sushi Chefs (including the previously mentioned one... and note I said "hint" not the total recipe) and this combined knowledge eventually ended up being the basis for her Sushi Rice Recipe.

So What is Sushi Rice?

Well, Sushi rice is made by cooking a super premium grade Japanese short grain white rice (sometimes medium grain is o.k., but not preferred) and then mixing it (while it is still hot) with a rice vinegar, sugar and salt mixture while at the same time fanning it to cool it off.

This combination of ingredients and activities together leaves the rice fluffy, but still firm, and with a shiny sheen to it.

Despite what you might think, just any old rice won't do for this. For one, it has to be Japanese sushi rice... well, sort of... maybe. More on that later...

The Japanese variety is a rice that has been in a constant search for perfection for centuries and is very different from the rice eaten in some other nearby Asian countries. A lot of which is not glutenous enough. 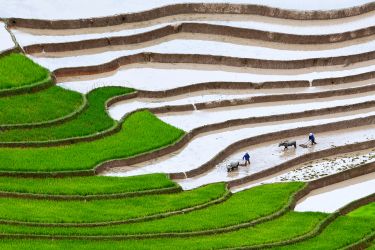 The Two main categories of Short-grained rice in Japan

In Japan, there are a number of short grained rice that are cultivated. Often they are referred to as Japonica rice, the two main categories of which are ordinary rice (uruchimai) and glutinous rice (mochigome).

Mochigome is a highly glutenous rice that is used mainly for making mochi (a rice cake that is very chewy and eaten in many different ways).

There is a variety of rice called Calrose, which was developed in 1948 and is a medium grain rice which has been grown by Japanese American producers in California for many years. While not a true Japanese rice, it is commonly used to prepare Japanese cuisine in North America and is a reasonably good to use for sushi. Popular varieties are Kokuho Rose and Nishiki both of which can be picked up in almost any large chain American supermarket today.

Given no other choice of a good Japanese rice, these will rice will do.

But for the best quality sushi rice, you have to use a super premium short grain white rice.

Two of the very best that you can get in the U.S. are Tamaki Gold and Tamanishiki. In that order.

Tamaki Gold is a California grown Koshikikari that is excellent. It is on par with the best Koshikikari cultivated in Japan.

Tamanishiki is also a California grown rice that uses two kinds of super premium quality short grain rice; Koshikikari and Yuma Gokochi. The combination of the two creates both great flavor and a wonderful texture. 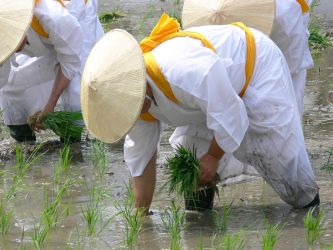 There are way too many varieties to go over but it should be mentioned that Koshihikari, is probably the most popular or maybe preferred rice cultivated in Japan.

It was created in 1956 by combining strains Nourin No. 1 and Nourin No. 22 at the Fukui Prefectural Agricultural Research Facility. And actually, the Koshihikari harvested in Uonuma area of Niigata Prefecture is normally the most expensive rice in Japan.

Many other popular strains, such as Akitakomachi, Hitomebore and Hinohikari were created afterwards by cross-breeding Koshihikari with other Japanese varieties of rice.

It now seems in recent years, that Koshihikari rice is also being grown in the U.S. and Australia; so to say that ONLY Japan grown rice should be used for sushi is no longer true.

If you can find Koshihikari rice whether grown in Japan, the U.S. or Austrailia, then pick that up to make your sushi.You probably can't go wrong with that choice.

Except in this case...

One reason that I would not pick up even a good variety of rice for sushi is if it was too old.

Normally, the "prime" age for rice to be used for sushi is between 6 months and 1 year old. Now, you don't have to split hairs here. If the rice is 13 months old, you are going to be o.k. But it still is quite common for Japanese to ask their Japanese Grocer if a rice is "Shinmai" or current years crop. It is an indicator of freshness.

And actually, if you want to "stock up" on the first crop rice (first crops of new rice picked in the fall), most Japanese will start looking for it in the spring around 6 months after the rice has been harvested. That's when to really get it and pile it up :-)

When the rice is in this 6 month to 1 year age range, the measurement for rice to water is typically one to one. 1 cup of rice to 1 cup of water. When you get beyond 1 year, the rice starts getting "harder" and thus takes more water to soften and then it starts to become more and more difficult to gauge how to cook it. Shinmai helps by providing a point of consistency.

If there is a date on bag, it helps because you know exactly how old it is, but it still is a roll of the dice.

To keep it simple, and to make your sushi rice making experiences consistent, then ask for Shinmai. Otherwise, your results may vary and will be your own risk.

Hopefully this provided some insight into the background of sushi rice, and why it is so important to know the differences so you will be given the best chances possible for making really good sushi.

Do You have a Favorite Rice You like to use to Make Sushi?

There are a lot of different kinds and brands of rice to use for Sushi. Tell us about your favorite.

What Other Visitors Have Said

Click below to see contributions from other visitors to this page...

Tamaki Gold Not rated yet
Have been using this rice since it came on the Market. Very good texture and taste, great just of steaming, or making into sushi rice Recipe for Making …

Back to the top of Sushi Rice